Recently there have been major changes made in the Dead's sound system, bringing it a big step closer to the ancient ideal of the perfect sound system*. This is a technical report; from the standpoint of the ideas on sound reproduction incorporated into its design, and with a description of its sub-systems.

The system is unusual in that all the speakers are arrayed behind the musicians. Conventionally, vocal systems occupy the front corners of the stage. There are two disadvantages to this. It creates a blind spot for people sitting in potentially good seats, and the musicians themselves don't really know how they sound. They have monitors, but these are not very effective, nor are the echoes which ricochet around the hall. With the speakers behind them, in integral array with the instrument speakers, the band is in a much better position to hear what the audience hears, and to adjust accordingly.

With the new set-up there is no need for a mixing console to adjust the various sound levels. Each microphone has a volume control on it, enabling the band to mix the vocal sound from the stage. Each musician has control of his own local sound environment, being able to adjust his stage monitors of other instruments as well as his own instrument.

The sound system is actually a combination of six individual systems, each being electronically separate and having a specific purpose and function. No two musical 'voices' go through the same system. Thus the vocals, piano, drums, lead guitar, rhythm guitar and bass each have their own channel(s) of amplification. This separation is designed to produce an undistorted sound, a clean sound in which qualities like 'transparency', 'brilliance', 'presence', and 'clarity' are substantial musical dimensions.

The whole system operates on 26,400 Watts of continuous (RMS) power, producing in the open air quite an acceptable sound at a quarter of a mile and a fine sound up to five or six hundred feet, where it begins to be distorted by wind. A sound system could get the same volume from half as much power, but it wouldn't have the quality.

THE VOCAL SYSTEM - The signals from each of the vocal microphones are brought together by a Differential Summing Amp, where phase purity can be regulated and hence the transparency of the sound maintained. From there the combined signal goes to a Crossover which divides the frequency range into four band (High, Upper Mid, Lower Mid, Low). The signal in each band is then separately amplified by MacIntosh 2300 amps fed to JBL 15 inch, 12 inch or 5 inch speakers or Electrovoice tweeters.

The center cluster of the vocal system, consisting of high and midrange speakers, is curved so as to disperse sound cylindrically; there is not much vertical dispersion, and horizontal dispersion is ideally between 140 and 180 degrees. The vocal low range speakers are arranged in a column. Each type of speaker is designed to have the same horizontal and vertical angle of dispersion so that all frequencies are heard equally well.

The speaker cones are arranged together as close as possible so that the whole surface of the cluster acts as one working surface. In this way a large mass of air is moved at once which doesn't require very high pressures from any individual speaker.

A major improvement in the quality of the vocal sound is due to the use of differential microphones. Each singer has a perfectly matched pair of Bruel and Kjaer microphones hooked up out of phase, only one of which he sings into. Any sound which goes equally into both microphones is cancelled out when the two signals are added together. Therefore leakage of instruments and background noise into the vocal channel is minimized.

THE PIANO SYSTEM - This is a small version of the vocal system. In this case a crossover divides the frequency range into three parts. The Highs and Mids go through a cluster of 5 inch and 12 inch speakers built in the same fashion as the vocal's center cluster. The Lows go through a column of 15 inch speakers. There is a separate volume control for each of the five Countryman custom pickups (one for each division of the frame) so that Godchaux can balance the sound. Garcia and Kreutzmann both have piano monitors or fills in their areas of the stage, which can be independently adjusted by them.

THE DRUM SYSTEM - The drum system has two independent parts. The bass drum uses one amplification channel and sixteen 15 inch speakers in a column. The other drums and cymbals are miked through a three-way crossover which separates the signal into Highs, Upper Mids and Lower Mids and feeds them to Tweeters, 5 inch and 12 inch speakers. This second part of the drum system uses two channels as it is stereo with identical speaker columns on both sides.

THE GUITARS - Both guitars use columns of twenty 12 inch speakers. Jerry's guitar has extensions beside Keith and behind Bill.

Jerry is using a Doug Irwin/Alembic custom guitar. It has a Gibson/Les Paul type body with a Fender Stratocaster pickup.

Bob currently plays a Gibson 335 guitar. He uses such special instruments as an Eventide Clockwork Digital Delay unit for repeating notes and creating an echo-like delay of different sound colorations and textures. Another accessory is an Alembic Parametric Equalizer (a flexible tone circuit) which gives him complete control of frequency response by enabling boost or cut adjustments at any or all of three band-widths. The sharpness of the boost or cut can also be controlled.

THE ELECTRIC BASS - Phil is using a new quadrophonic bass, the electronics of which were designed and built by George Mundy and the body and pickups by Rick Turner. The new bass has the same versatile qualities as the old bass: three pickups (bass and treble low-impedance pickups covering all the srings, and a quad pickup which has a separate signal for each sring); on each of the bass and treble pickups there are controls which enable him to select 1) the band width of the filter, 2) the center frequency of the filter, 3) the kind of filter being used, and 4) mix unequalized unfiltered direct sound with the filtered sound. The variety of sounds which can be achieved on the bass is the result of the many different combinations of these variables which can be used. The new bass has a frequency response with a crisper tone, and two quad pickups instead of one, the new one being a frequency-detector pickup. The main addition to the new bass is a Digital Decoding Circuit such that ten push buttons on the bass allow Phil to select any one of sixteen quad spatial arrangements of his speakers, and eight in the stereo mode.

DESIGNERS AND WORKSHOPS - The Grateful Dead's sound system has evolved over the last eight years as a technical and group enterprise, a sort of logical accumulation of speakers and people. Changes have been made continuously in all directions which aid in improving the quality of the sound, both which the audience hears and which the band has to work with on stage. The concept and design of the current system/level was worked out by Bear, Dan Healy and Mark Raizene of the Dead's sound and equipment crew, and by Ron Wickersham and Rick Turner of the Alembic sound company. The construction and regular maintenance is done at the Dead's technical workshops by the people responsible for managing and transporting the system on the road. The design and construction of some special electronic components was done at Alembic, where John Curl is a consultant to the project.

The number of people going on the road to handle all the sound equipment, lights, scaffolding and staging varies, but a typical configuration is: band - 6, sound - 10, lights - 4, staging and trucking - 7, road management - 3. The sound system travels in a 40 foot semi, and staging and scaffolding on two flatbed semis and the lights in a 24 foot van. All of this weighs about 75 tons.

We have been trying something new at some concerts on recent tours. Ned Lagin and Phil have been playing electronic cybernetic biomusic, "music as metaphor for thought." Phil's instrument includes a console which contains all the classical electronic-music studio techniques for processing the signals from his quadrophonic bass. It gives Phil the advantages of electronic processing of each string individually. Ned plays a digital-polyphonic keyboard instrument built by Scott Wedge and EM Systems, incorporating the same processing techniques, but he controls his own processing through an "organic artificial musical intelligence" - a digital computer (Interdata 7/16). This enables Ned to "change any or all of the parameters of sound or form in the music at microscopic, atomic musical levels as well as macroscopic formal levels with almost relativistic speeds."

* 'Gandharvas,' world of, wherein sound, as in song and music, is the prevailing quality of existence. (Tibetan.) 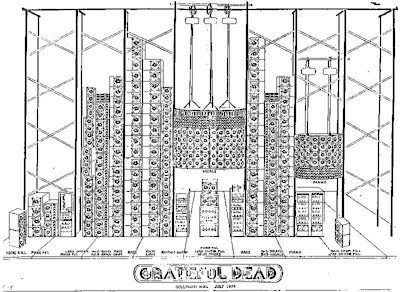