The rock 'n' roll beat of the Grateful Dead blasted the night air above La Dolphine, one of Hillsborough's most noted estates, when Mr. and Mrs. Albert C. Mattei gave a large dance there last night for their granddaughters, Ayn and Lyn Mattei.
The combo, which is well known to the Fillmore Auditorium set, if not to society, played on a dance platform set up in the formal garden, which was beautifully lighted for the ball.
Inside, in the ballroom, which has not seen a party this large and festive in many years, another orchestra, headed by Al Trobbe, played music that was far from staid, but more suitable to the adult guests. . . . .

[The rest of the article is a lavish description of the house and garden decor.]

Police and PG&E repairmen got in on the action at the weekend's two big deb balls on the Peninsula, and the culprits in each case were rock 'n' roll bands.
Hillsborough police had hoped to keep the racket of the Grateful Dead a "family affair," when the group played Friday night at the dance the Albert C. Matteis gave for their granddaughters, Ayn and Lyn Mattei, at La Dolphine, the Peninsula showplace.
But then complaints started to come in from residents in the Burlingame-Broadway area. The Grateful Dead were noisy enough to wake the dead, the cops were told, and so the band had to be moved from the garden to the inside of the beautiful mansion.
The following night, when the Edward Morse Hamiltons gave a ball for her daughter, Virginia (Lyn) Belcher, at their villa in Atherton, neighbors were more tolerant - probably they were all at the party - but the electrical requirements of two rock 'n' roll groups were too much for the wiring, and the lights went out all over the house.
The party carried on by candlelight for an hour or so, until service was restored at midnight. Naturally, the blackout put the combos, the Outfit and the Gordion Knot, out of action. Immediately, rumor spread that Walt Tolleson, whose music does not require amplifying, was guarding the fuse box.
Along with three bands, the Hamiltons presented a surprise feature: a belly dancer to match their Egyptian-style home. She performed sinuously in the living room at the height of the party.
The Hamilton dance had further unscheduled excitement when three CORE protesters, all properly dressed, crashed the party. They were permitted to stay and went unnoticed by most of the guests.

(by Frances Moffatt, from the "Who's Who" column, San Francisco Chronicle, September 1966)

La Dolphine, the beautiful Hillsborough mansion that has been silent and unoccupied off and on since it was built before World War I, burst into brilliant life with a rock 'n' roll beat Friday night, for a deb ball the Albert C. Matteis gave for their granddaughters, Ayn and Lyn Mattei. . . .
The 18th century styled chateau is set in 3 1/2 acres of terraced gardens which were floodlighted with pink and white spots for the party. Despite the evening's chill, the young set stayed outside to dance to the rhythms of the Grateful Dead, while their elders remained in the ballroom where Al Trobbe played. . . .
One of the members of The Grateful Dead is Bob Weir, the brother of Peninsula Ball deb Wendy Weir, who made her bow earlier this year at a marvelous pop party at San Francisco Airport.
The beat of the band was so infectious that the adults were eventually lured to the outdoors dance platform where credible frugs were performed . . . .

[The rest of the article describes the ball arrangements and attire.]

(by Joan White, from the "Women Today" section, the San Francisco Examiner, 5 September 1966)

Picture from the SF Chronicle: 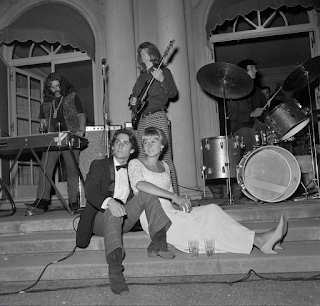