THE MUSIC PLAYING IN MY HEAD

It was nearly midnight and the line already wrapped around the Fillmore. We moved slowly, the chill biting our bodies, but feeling the intense high vibrations in the air. We were waiting for the Dead.
Inside, seated, and Cold Blood on first. Big band (horns), fuzz-tone guitar aplenty, a chick singer who digs Joplin. Not much, except loud. Lighthouse next, Skip Prokop's mighty mini-orchestra (complete with string section). Last saw them at Atlantic City where they were just starting, nervous and untogether. Much better now, with more direction and self-confidence. Eight Miles High and Beatle riff (Hey Jude/Give Peace A Chance) left crowd cheering. But we're still waiting for the Dead.
Zarathustra (Theme from 2001) ends as the lights come up from a frosty blue to a glare and... THE DEAD!
Country songs start off the set. Easy ridin' stuff, Garcia smiling out from behind his wire-rimmed beard. Already, impatience colors the crowd: "ST. STEPHEN!" "LOVELIGHT!" "GET IT ON, MAN!" "GOD BLESS THE GRATEFUL DEAD!"
Garcia starts a run on his guitar but it isn't happening. Weir prods him, Lesh pushes, but Jerry can't get it. Lesh, a stoned midnight cowboy, retreats in frustration and sits on his amp. We're still waiting for the Dead.
Pigpen does Good Lovin' and the rush begins. The song socks the Fillmore for two minutes, like a quick hit. Given a taste, we want more. We want the Dead.
Jerry starts again. Still slow in coming, but the energy is starting to bathe us. Weir follows Garcia, blending, going out in front, coming back, his runs teasing Jerry. Weir turns to Lesh and pulls him into the flow. Jerry finds something he likes and works it out; Weir and Lesh feed him. The rest of the Dead wait.
The tempo slows and changes. The lights are back to eerie blue. Distant, angry feedback growls from the stage, Garcia plugged into his guitar. The sound is pure, primitive. Ice-blue lights flood our faces, illuminate the Dead ghostly white. We're standing at the edge of eternity, in a new time, in a new mind.
"ST. STEPHEN WITH A ROSE, IN AND OUT OF THE GARDEN HE GOES."
Instant rush, a mad momentum that pushes us to the Dead. Garcia, a big round circus bear, singing and rocking. Weir and Lesh playing for each other, on their own trip. We're dancin' in the streets.
The Dead are peaking. Pigpen out front. "TURN ON YOUR LOVELIGHT!" They've been playing forever. We're all peaking.
Energy. Music coming from everywhere, bodies flashing, lights dancing. It isn't a song, but music - rock, jazz, folk-country - all coming together over the Grateful Dead, one organism making music. Acid rock. One trip. Ours. My trip, your trip.
Weir, the merry prankster, comes to us and holds out his arms, calling us to the tribe. Into the Woodland of Weir. Clapping begins, a pumping staccato in tempo with the magic on stage. The Dead are smiling. So are we. We're in the Dead's movie. It's like Woodstock, a new world.
An orgy of exchange. Giving and taking. Pigpen and Weir out of their heads. "OH YEAH!" The Dead split, waving and smiling. We dance into New York's frozen six o'clock streets, wasted, but still shouting.
Later, we drank coffee and listened to the silence of the sunrise. It seemed to be the only thing to do. God bless the Grateful Dead. Amen. 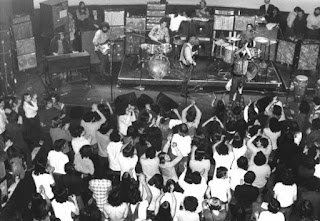 Posted by Light Into Ashes at 5:34 PM