WARNERS GOES ALL OUT ON GRATEFUL

BURBANK, CALIF. - Three weeks after release, sales of "Workingman's Dead" by The Grateful Dead on the Warner Bros. label have reached 200,000 albums. With the re-soliciting of Warner's distributors throughout the country lately, the total was raised to 400,000 records shipped.
Backing up this album, Warner Bros. Records Inc. is directly involved in the most wide-spread advertising campaign in its history. The bulk of the emphasis is in radio time buys on the top 40 level throughout the country, with $50,000 being spent directly from Burbank headquarters of the company, and another $50,000 coming from Warner's distributors. The distributors are also matching funds with major retailers for a co-op ad campaign, which is set to break during the final week in July for maximum impact across the country.
Warner Bros. Records also bought a billboard on the Sunset Strip, and the largest outdoor advertising space in San Francisco, home of the Dead, a billboard above the Fillmore West. This is the first time a record company has used the latter space to advertise.
Additionally, Warner Bros. has set an extensive space advertising program. National ads are being placed in trade magazines, underground news media, and mid-road consumer publications. The company is merchandising the album with Grateful Dead posters, stickers, and buttons. 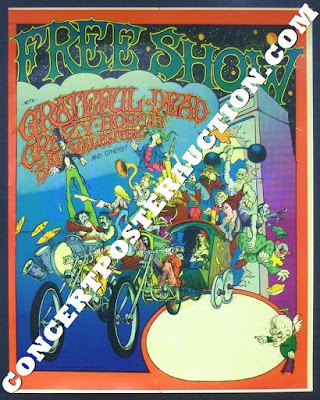 http://concertposterauction.com/detail.asp?id=4630#img
"Tour blank concert poster for a proposed Warner Brothers-sponsored series of (canceled) free concerts to be held over the summer of 1970, featuring the Grateful Dead, along with Crazy Horse (without Neil Young) and Sal Valentino... Since the tour was canceled (it actually sort-of morphed into the 1970 "Medicine Ball Caravan" tour, with different participants), most of the posters were remaindered and never made it out of the print shop."
Posted by Light Into Ashes at 5:03 AM