This Friday evening SJS is having its own “trick-or-treat,” when it brings out The Grateful Dead to play in the College Union Ballroom.
The Grateful Dead, pioneers of the San Francisco sound, will be making their first appearance at SJS Halloween night.
“The Dead” have added a little country to their blues and psychedelic elements, and the blend works well, according to people who saw them last weekend at Winterland.
“The Dead,” whose music has what many people term a euphoric effect, will play two sets, a total of one and a half to two hours. It is hoped that they will play some of their more famous sets which range from straight country, as in “Mama Tried,” to the blues encore, “Good Morning Little School Girl.” In the former, bass guitarist Phil Lesch produces a good country vocal sound, and in the latter, Ron (Pig Pen) McKernan is at his vocal best.
Lead guitarist Jerry Garcia also has a good set as does organist Tom Constante and rhythm guitarist Bob Weir. The dependable work of drummers William Kreutzman and Mickey Hart is ideal in the country tunes.
Accompanying “The Dead” will be the far out sounds of the “Experimental Flash.” In addition, two color horror films will be shown, “Billy the Kid vs. Dracula” and “Godzilla vs. The Thing.” Both films will be shown silently behind the bands.
The dance will be held from 9 p.m. to 1 a.m. and admission is $2 for students and $3 for the public. Tickets are on sale in [the] Student Affairs Business Office, located on the second level of the College Union.


BANDS TO PLAY AT MASKED BALL IN COLLEGE UNION

The Grateful Dead and Southbay Experimental Flash will perform at 9 p.m. tonight in the College Union to a masked audience.
In keeping with the theme of Halloween, the College Union Program Board (which is sponsoring the dance) has asked that all those attending tonight’s dance wear masks.
It is hoped that the debut of The Grateful Dead at SJS will be a pace-setter for future “name groups,” according to [the] CUPB student director.
The CUPB will provide masks for those who “forget their disguises.”
Tickets are still available in the Student Affairs Business office. [...]
[The] CUPB director added that in case it gets too warm, there will be “bobbing for apples” as refreshing but perhaps “ghostly” fun. 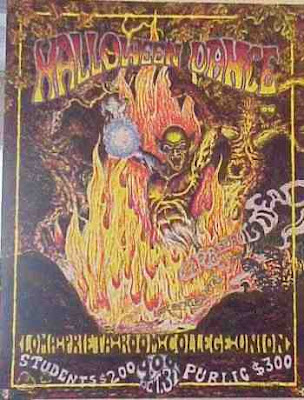 Posted by Light Into Ashes at 3:27 PM