One of the finest rock performances to hit the Washington area happened last weekend. The Grateful Dead and their sidekick band, The Riders of the Purple Sage, played to a jam-packed audience at McDonough Gymnasium Friday night.
Possibly McDonough was the only place available for the concert, but the promoters couldn't have chosen any place worse, for at the 8:30 p.m. starting time, the hall was already packed to well over capacity. Meanwhile, over a thousand people waited outside to get in. Tickets were sold out, and all entrances were sealed and guarded by police, some with dogs. Those waiting outside were afforded the opportunity to at least hear the Dead by means of several speakers set up outside. That crowd, partially made up of ticket-holders, was not satisfied with merely listening however. They wanted to see, too. Their solution was a simple one. They clambered in open windows, smashed closed ones, and shouted obscenities at the innocent guards.
On the inside, many people, near collapse from the ninety degree heat and the 100% humidity, tried in vain to escape the unbearable discomfort. Despite their efforts, guards would not open any doors for fear of those outside charging in. Finally the guards and the management gave in. When the doors were opened, a great rush of people streamed in. At this point, McDonough Gym was not fit for human beings. Nevertheless, on "Honky Tonk Woman," Jerry Garcia's slide-guitar work and Bill Krentzmann's drumming evoked the entire mass of people to stand up and dance wildly.
Following the Riders' set, they and The Dead went back to their hotel in Washington for an hour, leaving everyone just sitting there. But the crowd, used to long delays typical of Claude Jones and Company, made good use of the time by tossing around the inevitable Frisbee. While the crowd cheered and booed the Frisbee-throwers, the Mother Truckers made their usual idiotic announcements and remarks like "Keep it Cool." There were also those who kept telling everyone to move away from the front of the stage. Because there was obviously no room, no one moved.
Finally, at eleven o'clock the Grateful Dead walked onto the stage and opened with "Casey Jones." On this through their next five songs they displayed a togetherness and musicianship that made this writer wonder why they haven't enjoyed as much success as they deserve. But it was when they went into their seventh number, "Good Lovin," that they sent the crowd wild. Garcia's five minute introduction along with Bob Weir's fine rhythm guitar work and the beat of two drummers brought the crowd to an ecstatic frenzy. Through 25 minutes of that song, Garcia and Weir swapped leads and harmonized with organist "Pignpen" McKennan and bassist Phil Lesh.
The Dead's thirty minute finale, "That's It for the Other One," was interesting, but anti-climactic after "Good Loving" and many of their earlier songs. Stomping and chanting, the audience brought The Dead back from their dressing room to encore with "Uncle John's Band," from their current album, "Workingman's Dead."
Although the music was excellent, all were relieved to get out of McDonough. Many swore they would never go to another rock concert at that place again. Again, Washington came close to ruining its concert scene. 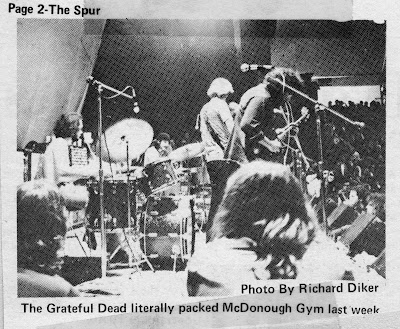 (by Rowland Teape-Davis, from the Spur, late October 1970)

Thanks to Michael Backhouse.
Posted by Light Into Ashes at 9:03 PM