Last Friday The Grateful Dead presented a concert at the University of Cincinnati, and I doubt whether the Fieldhouse will ever be the same. The good feelings that hung in the air, the aroma of little cigarettes (I wonder what they could have been?), the vibrancy of the music, must certainly have caused a change in the molecular structure of the place.
The concert brought together various groups that helped to make the evening a good one. The Hog Farm was there, handling the technical aspects. One of the best things about the show was a spectacular and genuinely mind-opening light show, certainly the best I've ever seen. It used film, design and light to great advantage.
The story of the evening, however, was music. The first group to appear was the Lemon Pipers, a solid local band that did some blues-influenced rock. Good instrumentalists (except for the drummer who was monotonously heavy and not up to some of the tempos), the group started strongly and then got bogged down in some slow things that made their set run out of gas rather quickly.
The second group was Devil's Kitchen from Illinois. Ironically, they weren't very good instrumentally, and their singer is woefully bad, but they have a very fast drummer that kicks them into sounding like a pretty good band.
I should point out, however, that everyone knew that the bands were there just to warm-up the audience for the Dead. As such, they did their job well and were politely received by the happy audience.
After Devil's Kitchen left, there were the usual open-mike ramblings and then someone put on some Santana tapes. People wandered around, shaking to "Jingo," and then, "From San Francisco, here they are, the Grateful Dead!"
There they were, the two drummers, Pig Pen, Jerry Garcia, the works! There is no doubt about it, The Grateful Dead are one of the finest rock bands around. They played one of the longest and most exciting sets of rock I've ever heard. Some of the highlights: a long and friendly acoustic segment with a good version of "Wake Up Little Suzy," a crowd pleasing version of Bobby Bland's "Turn On Your Love Light" featuring a great solo by Garcia on guitar and a good shouting vocal by Pig Pen, a chugging version of "Good Loving" that led to interpolations of other tunes and a tremendous drum duet (along with the usual brilliance of Garcia). It is hard for me to single out other great moments, for the band's greatness lies in its ability to flow from song to song, from improvisation to improvisation, from shieking loud ensembles to controlled soft solos. Most importantly (and perhaps this is why they're so good) the guys in the band listen to one another, so that the total sound of the band is what grabs the listener.

Thanks to Mark Neeley. 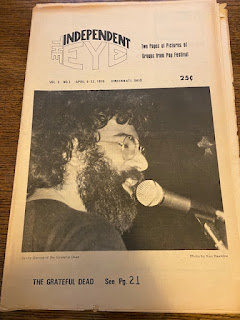 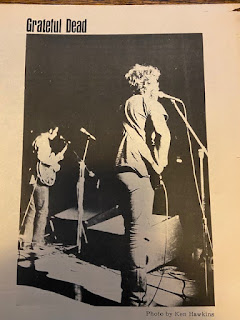 Posted by Light Into Ashes at 5:24 PM