BACK AT LAST - A SOUNDPROOFED MATRIX
WATCH FOR THE HEADLINERS
If you're going to run a hippie night club, you're going to do it hippie-style, damn the profits, but pay some dues - right?
Wrong. Or, at least at the outset, owners of the Matrix pushed the profit motive as far as they could.
But, to their credit, the pursuit was hip all the way from the introductions of the Jefferson Airplane and the Steve Miller Band. through upsets both financial and legal, up to a police bust last October (too noisy) and continuous threats of more shut-downs until the club's owners (new ones, by then) finally threw in the towel in March.
Today, the Matrix has reopened at its old Marina residence, 3138 Fillmore St. Its owners are freshly prepped on the business side of night club operations and they've soundproofed all four walls with six-and-a-half inches of absorbent fiberglass and sheetrock.
The walls were amply tested in a pre-opening benefit in June. Big Brother, Steve Miller, the Charlatans, Sandy Bull, and the Santana Blues Band provided sky-high decibels as a newly-acquired rent-a-cop, posted outside, smiled the fuzz away.
Club owners are Pete Abram and Gary Jackson, a pair of UC Berkeley graduates who took control nine months before it closed last March. Abram had established himself at the club a year earlier with his tape recordings of booked groups, chief among them the Great Society (represented by two vacuous LPs on Columbia) and Canada's Sparrow (now Dunhill Records' successful Steppenwolf).
Because of the nature of the business, small night clubs have slim chances of succeeding financially. Abram and Jackson are trying out a new idea: To attract top bands, they are offering 95 per cent of the door money to the musicians. Cover charge is $2.50 with a legal capacity of 104. Five per cent of the door goes to the person who handles booking. In a normal night club operation that would leave them only the proceeds from drinks, etc, to pay upkeep and turn a profit.
They hope to make a profit from recordings of Matrix performances.
Abram scored substantially last year when Columbia laid out $20,000 for his Great Society tapes, despite the doubtful audio quality of Abram's $200 recorder and $13 mikes.
Now equipped with a mini-studio setup (Magnacord recorder mixer and a slew of professional mikes), Abram and Jackson plan to make money by selling demonstration tapes to forming groups who need demos for prospective angels (financial backers) and record companies.
Tapes of groups which are already contracted by recording companies could be sold only by arrangement with the recording company and/or the groups or their agents. Some of these groups might want tapes, however, for their own use.
Abram is negotiating with a major record label which would provide professional recording equipment in return for the first right of refusal on uncontracted performers.
Abram and Jackson also hope that the Matrix can again be a springboard for good new bands.
The original Matrix owners opened in August of 1965 - on the first great tidal wave of "hippies" - with just that in mind.
"Marty Balin (Jefferson Airplane co-pilot) was a part owner of the club," Abram recalled, "and he was with a folk group, the Town Criers, before the club opened." Early plans called for the Matrix to be just another body exchange - "something like the Drinking Gourd," Abram said. But before the doors opened, Balin and friends plugged in, became the Airplane, and needed only a hangar. The Matrix was it.
Before long, with the rise of the Haight-Ashbury, the ballroom light show-Oracle-posters-Aquarian Age scene, and [the] continually growing distinction of "The San Francisco Sound," the Matrix was a starting point.
Among the beginning groups were Blue Cheer, Great Society, Sopwith Camel, Country Joe and the Fish, Big Brother and the Holding Company, Steve Miller, and the Charlatans, not to mention among others, the first local appearances of the Chambers Brothers, the Electric Flag, the Blues Project, and the Doors.
The full list, without making any kind of understatement, reads like a Who's Who of post-hip rock.
The club, set amid several niteries in upper Fillmore, in a district zoned for everything from bowling alleys to little old lady residents, soon drew the organized wrath of a trio of LOL's Abram blithely refers to as "the Carrie Nations of Cow Hollow."
Their complaints about noise were aimed at three or four clubs in the immediate area. The Matrix was the first casualty. A Big Brother appearance was scratched after warning of a big bust from City Hall-paid Big Brothers. Then an actual bust occurred last October during an audition session, with Abram getting a $250 fine plus probation and suspended sentence.
After that, threats came more regularly than some of the club's best customers. Abram and Jackson closed the room in March.
Returnees will find a mammoth 6x24 stage where the bar used to be, a beer-and-wine policy, and entertainment bills boasting one headliner, one newer band, and periodic surprise jams. Its first-week bill last month was Steve Miller, Crome Syrcus from Seattle, a guest set by the Anonymous Artists of America, and some jamming by Harvey Mandel (late of Barry Goldberg Reunion and Paul Butterfield Blues Band) and his new group.
Last Monday, Jerry Garcia, freaky lead guitarist of the Grateful Dead, dropped by to jam with three or four friends, and the club made its usual closed night an admission-free affair.
One small - but important - irritation: Unless the Matrix gets rich quick, audiences can expect a bum air conditioner.
It's not Auschwitz-bad, but, as Abram himself said, tongue and a few strands of his long black hair in cheek, "Right now our only problem is getting the wine to the customers before it evaporates."
(by Ben Fong-Torres, from the San Francisco Bay Guardian, 1 November 1968)
Thanks to jgmf.blogspot.com
See also:
http://deadsources.blogspot.com/2018/09/october-30-1968-jerry-garcia-at-matrix.html
https://jgmf.blogspot.com/2010/02/mickey-and-hartbeats-october-28-1968.html 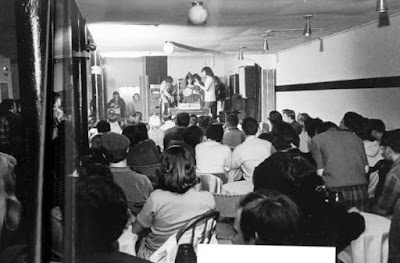 Picture caption: In the early days, The Jefferson Airplane at the Matrix. Today, a 24-foot-long stage dominates the left side wall, once a bar. Photo by Jim Marshall
For more early Matrix history, see JGBP & Wiki.
For Matrix show lists, see COAU & Examiner listings.
And for a glimpse at the pre-'68 Matrix, this news clip of a rehearsal from Feb '67: https://diva.sfsu.edu/collections/sfbatv/bundles/210748
Posted by Light Into Ashes at 4:34 PM