STILL HOT, BUT SKI NUTS OUT  (excerpt)
Unusual ski shop openings have become the vogue in the Bay Area.
This season has proved to be no exception for they have been wilder and zanier than ever before.
[ . . . ]
Probably the wildest was Wednesday night when Susie and Doug Tompkins held the official opening of their North Face shop next to the Condor - Carol Doda and Company - on Columbus.
The first thing the guest saw was a pair of Hells Angels, of the infamous motorcycle gang, at the door checking invitations.
Inside, the musical group the Greatful Dead, were putting forth with sound and people were dancing wildly amid the ski equipment displays.
And what a collection of people. There were nattily dressed individuals rubbing shoulders with bearded, long haired and sandal clad beatniks from the neighborhood.
Several passerbys looked in, thought it was merely another bistro, and tried to enter, but they were politely restrained by the Angels.
Needless to say the whole evening was a wild show and it took most of the next day to clean up the lemonade stains and the animal cracker crumbs...

(by Miles Ottenheimer, from the San Francisco Examiner, 28 October 1966) 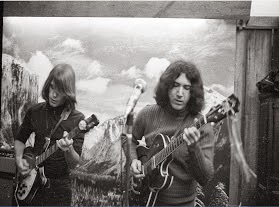 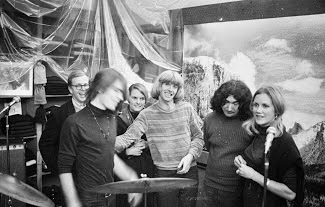