VIBRATIONS IN THE VALLEY

There's a worthwhile happening at the Phoenix Travelodge Theater tomorrow night. James C. Pagni of San Diego is bringing in a couple of acts that ought to bring glee to the hearts of all dedicated followers of fashion. The lineup will consist of of San Francisco's pride and joy, the Grateful Dead, England's Ten Years After, and last, if not least, our own Thackeray Rocke.
The Dead are probably the most unappreciated group around these days. While their music has had a tremendous influence on the modern rock scene, their popularity among the pop population has not been a reflection of it. They remain as sort of musician's musicians. A major reason for this may be the Dead's out-and-out rejection of the commercial system. (The Maharishi once tried to persuade them to get on the bandwagon and change their name to Everlasting Life. They couldn't dig it.)
On stage the Grateful Dead are something else. They combine a funky rock with some hard core blues and manage to come up with new exciting sounds. You get the feeling that while the Jefferson Airplane was so busy "loving you" the Dead were spending their time in rehearsal.
Ten Years After is another case of a fabulous group that is literally unknown in the States. (Promoter Pagni has another way of putting it, "I bought them too soon.") Their album has been at the top of the British charts for some time and lead guitar player Alvin Lee is finding himself thrust into that tight circle of such trendsetters as Hendrix, Clapton and Bloomfield.
The action will begin at 8.

Jon Sargent also wrote a very brief follow-up review in his "Vibrations in the Valley" column in the 6/30/68 Arizona Republic:

Last weekend's Grateful Dead concert was a smash. Too bad not everyone knew it. The further the Dead got into their music the quicker some people got out to their cars. 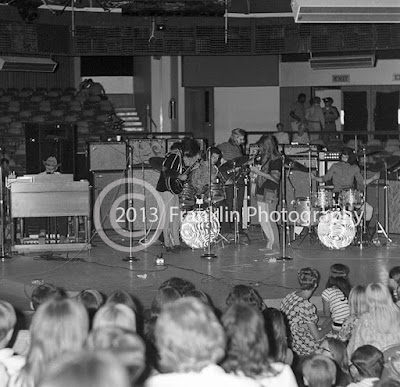 More photos at: http://tjfranklinphotography.com/wp/the-grateful-dead/
Posted by Light Into Ashes at 3:27 PM