JAM AT THE FILLMORE

The concert was announced at the late show Saturday night; tickets went on sale Sunday noon, and were sold out Sunday evening, showing the popularity of the Jefferson Airplane and the Grateful Dead. The two bands, the best that came out of San Francisco, had never played together in New York before. But the Airplane had a concert cancelled, and the Dead were in town, so Bill Graham scheduled the two together for last Monday night. Unfortunately, only half the Airplane showed up, but even so there was more than enough music to last for eight hours.
At 8:30 Bill Graham announced the New Riders of the Purple Sage who travel with the Dead, and for whom Jerry Garcia plays pedal steel guitar. They played their country western music very smoothly and tightly, playing most of the songs they usually do in concert - "Truck Driving Man," "Last Lonely Eagle," "Dirty Business," and ending, as almost always, with "Honkey Tonk Women."
In "Dirty Business," Jerry Garcia produced sounds that have to rank among the weirdest in the world, making wailing feedback noises with a wah-wah on his pedal steel guitar. By the time they played "Honkey Tonk Women," everyone was on his feet, dancing and clapping.
The audience was enthusiastic for Hot Tuna - Jorma Kaukonen and Jack Casady of Jefferson Airplane on guitar and bass, and Will Scarlett playing harmonica. Normally, Joey Covington of the Airplane plays drums, but since he had burned his hands, they had another drummer for the night. While the New Riders play country music, Hot Tuna is deeply rooted in the blues tradition. They play songs by Mississippi John Hurt, Furry Lewis, and Reverend Gary Davis, songs like "Candyman," "Windin' Boy Blues," and "The Midnight Special."
With Kaukonen, as usual, playing acoustic guitar, they started with "Know Your Rider." However, he then switched to electric guitar, and introduced a new member of his band, Poppa John, playing electric violin. Poppa John was immediately the star of the show. He stood swaying back and forth, his mouth half open, his violin seeming to be a part of his body. When he played a solo, his phrases soared and swooped, and wailed above Kaukonen's powerful guitar lines.
At one moment he would sound like Jimmy Page, at the next like Sugarcane Harris, then like nobody but himself, ending his lead on a screeching note that faded into the progression again. They returned to the traditional as they finished with "Hesitation Blues," showing off Kaukonen's finger-picking blues guitar style.
The Dead are the tightest band in the world. From the very first note of "Casey Jones," everything was in place and under control. Bob Weir holds everything together above the double drumming of Mickey Hart and Bill Kreutzmann. Jerry Garcia swirls guitar phrases among Phil Lesh's syncopated bass lines, and Pigpen plays organ and sings.
They played dance music - "Casey Jones," "Not Fade Away," "Good Lovin'," and old rock and roll by Chuck Berry. During their set Steve Winwood came onstage and played organ, and Chris Wood and Jim Capaldi sang. All the while the Dead never got distracted. After three hours of playing, they finished with the most vocally tight version of Uncle John's Band I have ever heard.
Afterward, Hot Tuna jammed for another hour, finally ending what was for New York unfortunately a very unique concert, one where excellent musicians just get together and play. 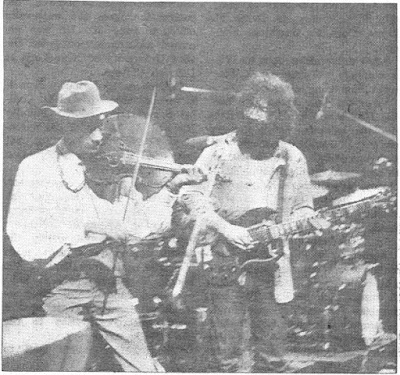 Posted by Light Into Ashes at 2:43 PM