A GARLAND FOR CHOCOLATE GEORGE  (excerpt)

Chocolate George lies in state, looking like a wax figure of Attila the Hun. A fur cap hides his bare head, shaved when the doctors tried to repair the skull Chocolate broke when he flipped over the handlebars of his Harley.
His grease-smeared Hell's Angels jacket is pinned like a battleflag on the underside of the coffin lid.
A hundred Angels and their women walk into the funeral chapel from under the bright morning sky to hear Sonny Barger, head of the California Angels, say a quiet eulogy.
[ . . . ]
In front of the chapel, the president of the San Francisco Angels' chapter shows a friend a red-printed leaflet emblazoned with a helmeted skull. "S.F. Party for Chocolate George," the sheet says, "Golden Gate Park. Bring Food, Drink, Smoke, Wail.
"The Dead. Big Brother."
Fifteen hundred people follow the map and the word to Lindley Meadow in the park. Before the rock bands arrive, the scene looks like two medieval armies lined up on hills separated by a small valley, wondering whether they should do battle.
The cyclists line the roadside next to their bikes. A growing cluster of hippies sits on a hill across the shallow valley, under a phallic pagan sculpture. Both groups are waiting for it to happen.
The numbers balance, then tip to a predominance of hippies, the gentler outcasts. The groups infiltrate one another and become a strange, large sea which speeds the pulse of passing tourist buses and extra police patrols.
Two cops stop their car, get out, and lounge with deliberate ease at the back of their vehicle. A tambourine passes through the crowd, gathering coins for the beer run. Carved pipes pass from mouth the mouth, wafting a sweet, happy smoke.
A green pickup arrives with thousands of cans of beer floating in shaved ice. Shirtless, hairy Angels pelt each other with snowballs and hurl showers of ice through the August sky into the crowd.
The Grateful Dead ride in atop an Avis truck. They park under a tree, plug in, tune up, and the celebration turns on.
A visiting cyclist is annoyed by a dog. He lashes out with his boot. An Angel's dog. The dog-kicker disappears in a crush of angry bodies. When the writhing huddle parts, there is no one left lying on the ground.
The sun is getting lower in the sky when Big Brother and the Holding Company begin their sound. It goes on and builds until something in the crystal chorus tells the throbbing crowd that this is it, the high end of the celebration for Chocolate George.
Strangers, friends and onlookers evaporate from the meadow within minutes. A Hell's Angel is dead, honored, gone. ... 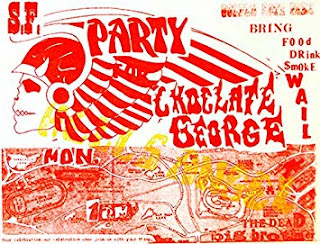 Film clips here, here, and here.
Posted by Light Into Ashes at 7:50 PM