Mr. Jones, Haight Street was a celebration of people on Sunday. The street filled spontaneously at five minutes before three, and The Grateful Dead sang from two long trucks in front of the Straight Theater.
At least 1000 people packed into the block facing the musicians. People had to squeeze to move anywhere, but the congestion was loving and non-pushiness prevailed.
Strong vibes from the Dead. "I need your love in the middle of the night..." ...a play from a balcony...a speech for the Black Panthers and Huey...a cheer for Alioto.
The police aren't wearing their riot gear and are friendly. Two Reserve officers (volunteers) look like Boy Scouts in their green uniforms. There are no traffic problems. Cars wait for pedestrians on those north-south cross streets, which are open to cars at the request of some businessmen.
The street festivals are bringing all of the merchants more business, says Laura, of I & Thou. She rapped with merchants who stayed open on Sunday.
The only negative vibes come from an increasingly isolated kill-joy, a Mr. Jones. He is a straight businessman in the Haight Ashbury Merchants Association, and he says, "These kids are from the bottom of the barrel. They stand outside my store day after day. Today I had to sweep away their orange peels. Tell them if they want to play drums they can go to the Sahara Desert."
Most of the community is too excited about new plans for Haight Ashbury to worry about Mr. Jones... [Various community representatives] are busy with plans for new festivals...
SDS plans to present a 5000-signature petition to the Board of Supervisors this Monday. They are asking the Board to keep Haight Street open every Sunday.
Other community leaders are looking into free art materials, games, and music for future Sunday happenings...
"O how happy we would be," sang a stoned Haight Street quartet last Sunday.

(by Jan Garden, from the San Francisco Express Times, 7 March 1968)

(From a second article, "Cars to Roll on Haight Again":
"Mayor Alioto's office announced as we went to press that Haight Street would be completely open to traffic this Sunday, and every Sunday thereafter until the police, fire, and public works departments certify that closing the street will pose no special problems. The chances of this happening are zero.")

Haight Street became a mall for the second Sunday in a row by order of Mayor Alioto -- but this time the scene was a little less cool.
By the end of the evening the sweet smell of pot had been overcome by the stale odor of beer and spilled wine. It doesn't help matters that the straights from Daly City and San Jose might have been the cause. The day ended without any major incidents, but a bit off the groove.
This coming Sunday the action will be shifted to the panhandle and the park to allow for an assessment of the scene and for legislation to be initiated to make the mall a regular thing.
Meanwhile the community will marshal its forces to present its views to the Board of Supervisors; and to lay new and better plans for artists, guitarists, rappers and meditators to brighten and enlighten the street in the future, if all goes well.

Last Sunday the barricades went up promptly at three o'clock. Traffic dwindled, and the happy people filled their street.
Guitar players did their thing in doorways and on the street. At least one rock group made pleasant sounds in the park, and the Grateful Dead trundled out a truck in front of the Straight Theater and "let there be music."
Earlier in the day, in the spirit of "mall day," painted dashed circles appeared on the street labeled "trees," "flowers," "redwood trees." Mostly the vibes were as pleasant and serene as the Sunday before. Oddly enough, some of the pleasantest people on the street were cops -- badge 139 of Park Station beamed a smile and talked with the kids, another cop let the kids climb all over his motorcycle, and a foot-cop later in the evening dug deep for coins to give to two Black kids who had spent their carfare money earlier in the day.

But there was also a difference between this Sunday and last -- perhaps the same difference that distinguishes love from passion.
Political posters coupling the "liberation of our street" with other causes put some people uptight. Others yearned for the spontaneity of the previous Sunday. "Already an institution" some said, and complained that radio stations plugging the closing had pulled too many tourists into the area.
To complicate matters, a soccer game at Kezar tended to load the street with beer drinking soccer fans once the stadium let out. Traffic cut the street at two intersections, Ashbury and Clayton, directed by pleasant-minded cops. But the street was that much less free. At ten o'clock, the last knot of celebrators in front of Tracy's dissolved and the street reopened to traffic as scheduled. Aside from a few quickly-cooled scuffles, the time of the mall passed quickly and, as they say, "without incident."
Asked to assess the day, Al Rinker of [Haight-Ashbury] Switchboard told KCBS, "It's a neighborhood street and we wanted to put Sunday back in Sunday for the neighborhood.
"Frankly, having a rock group on the street was probably a little too strong -- we love the Dead and are glad they played but we ended up with more of an audience effect than a participation effect."
Other observers also were unhappy because the crowd jammed around the Straight completely cut off any kind of pedestrian traffic down the street, defeating the purpose of the mall.
[ . . . ]
For this coming Sunday the action will be shifted from the street to the park and the panhandle pending the big push to make the street into a Sunday mall. The Mayor's liason man to the Haight, Mike McCone, said:
"Twice now the Mayor has declared Haight Street closed to traffic as an emergency measure. To become a regular thing, the street closing will have to be voted on by the Board of Supervisors in open hearing to allow for a fair sampling of community opinion. This is legally required by the city's charter.
"As far as the Mayor's office is concerned, we're anxious that the Haight should have a community climate in which the functions and activities of the street will benefit all."
In politically-savvy quarters it's felt that closing the street again by executive order would antagonize the Board of Supervisors and be prejudicial to a fair hearing of the whole community.
In the meantime, there's a growing spirit of cooperation between hip and straight in the Haight. [ . . . ]

(From a second article, "Hash Hopes Brought Down":
"Hopes for further festive street closings on Haight were squashed Wednesday when SF Mayor Joseph Alioto shifted responsibility back to the Board of Supervisors. Alioto was nudged by Haight property owners who objected to recent Sunday street happenings.
The mayor indicated that closings of the Haight would be possible only if proposed by the entire surrounding community. Normal channels for such a proposal now again go through the Police, Fire, and Public Works Departments, and a committee of the Board of Supervisors, and the entire Board.
Alioto for the past two weeks had used his special police powers to close the street to 'avert traffic congestion and other problems.'") 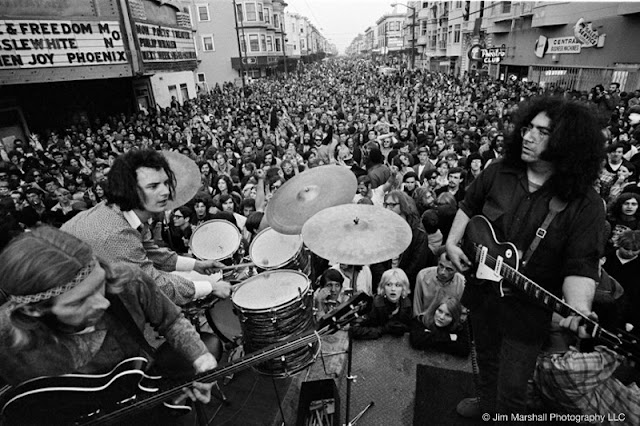 Posted by Light Into Ashes at 5:50 PM