THE LOVE AND WHAT REMAINS

The Grateful Dead at Stakladen, Student House:
a new clarification, here is the alternative culture in synthesis

They are astronauts in inner space, said William S. Burroughs. And the journey was endless, for its goal was to capture life itself in a drop and keep it forever.
Last night they gave a concert in Stakladen, Student House: Jerry Garcia, Bob Weir, Phil Lesh, Ron Pigpen McKernan, and Bill Kreutzmann - The Grateful Dead.
And now the act seems accomplished - the act they must clarify according to legend, because they may belong to the category of "the grateful".
Here was the banishment, the inner calm; it was the alternative culture in synthesis. The love and what was left of Haight-Ashbury, San Francisco, and where it was now.

The basis of The Grateful Dead is country & western music, but it is free of horse manure and primitive skirmishes.
The result is subdued, at times monotonous - for Phil Lesh, Ron Pigpen McKernan, and Bill Kreutzmann lay a strong rhythmic foundation to Jerry Garcia's and Bob Weir's expansions.
The center figure is Jerry Garcia, whose guitar playing moves to the outer limits (no big deal, he just does it, that's all).
The characteristic west coast sound is not absent, but it has matured. Hallucinogens are no longer needed - The Grateful Dead takes nourishment in the realization.
All these influences seized the whole hall, and the clarification spread. It was less music than it was close interaction with the audience.
The three and a half hour concert gave the facets that The Grateful Dead has put together; the numbers ranged from traditional blues to country & western to rock paraphrases.
"Our love will not fade away" sang Jerry Garcia - Bob Weir (Norman Petty-C. Hardin's classic). Our love will not fade away.
It is possible they are dead. We are grateful.

(by J.R.J., from the Aarhus Stiftstidende, April 17, 1972)
https://archive.org/details/gd72-04-16.sbd.miller.18103.sbeok.shnf (partial)
*
Some background from the Aarhus University history site:
The review is presented here with kind permission from Jørn Rossing Jensen.

The author of the review above, Jørn Rossing Jensen, tells the following in 2010 about the review from 1972:

"Unlike so many others, I remember it clearly: when it had been in the newspaper, I received by courier a note from the editor, asking if it wouldn't have been more convenient to send it on a postcard to those especially interested, instead of burdening indifferent readers with incomprehensibility."
On April 16, 1972, the American West Coast group The Grateful Dead gave a concert in Stakladen. Earlier, newspaper columnists in the daily press had called for the group's performance to be banned, believing that these veterans of Ken Kesey's acid tests in San Francisco in 1965 could affect the concert audience in an unfortunate direction. But Jerry Garcia, the group's lead guitarist and informal leader, declared in the press: "I do not give LSD to anyone!"
...The group's historian Dennis McNally tells his readers about the concert in Stakladen, that "the show was in a low-ceilinged cafeteria, people hanging off wooden trusses all over the place." (A Long Strange Trip, p. 429).
It is true that the audience took advantage of the room's special construction with the high beams to secure seats with a good view on this Sunday evening in April 1972, where the Grateful Dead according to experts delivered one of the European tour's finest performances of "Truckin'>The Other One" - however, something similar happened at least at most rock concerts around this time: in Aarhuus Stiftstidende's review of the concert with the British group Family, it is stated that a large part of the 800 people present had placed themselves on the beams. 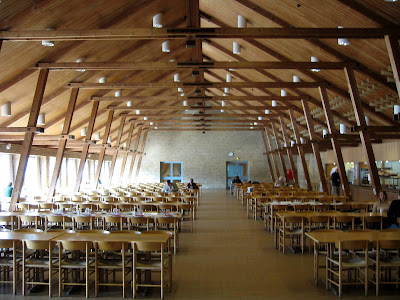