WHAT A LONG PREDICTABLE TRIP IT'S BECOME

This week the Grateful Dead trucked back into Britain. In America they're more successful than ever – and even Jerry Garcia can't work out why. He'd rather see Gary Numan...

"Sit down in that corner," says the photographer. "Are you asking me or telling me?" murmurs the musician, innocuously. "Which corner?" He looks around the room, eyes twinkling with amusement. "That corner! On the floor! Jesus, do you think I'll be able to get up again?"
He sighs good naturedly and plonks onto the floor underneath a lamp, spreading his legs out.
"Hiyeee," he gestures, mildly embarrassed. "This is for what? New Musical Express... Yeah, I remember. That's pretty amazing. I don't remember much. Memory is the first thing to go."
He chuckles to himself, and then steels himself as the photographer snaps. A lump of cigarette ash has found a good home on his profoundly shapeless greasy green cord trousers. When he stands up the ash will drift to the floor and the bottom of his trousers will sadly fail to reach his ankles.
"Do you listen to much new music?" asks the writer as the camera clicks again.
"I haven't heard anything really new," the musician admits.
Within the last ten years?
"Well, within the last year. I'm a big Elvis Costello fan. I like Dire Straits, but that's to be expected – it's easy to see why I like them. And I like Gary Numan a lot."
You like Gary Numan!!
"Sure do," he earnestly announces.
Have you seen him in concert?
"No, but I would like to. I think his stuff is really interesting. I think he's got a real thing. I like people who have a real conviction about what they do. Convinced that they have something to say and a real way to say it."
You should meet up with Numan and do some work with him.
"Oh no! I'd be intimidated by him. Shit yeah...these guys all seem so much more together than I feel. I feel like someone who is constantly on the verge of losing it, of blowing it. I feel tremendously insecure. When I see people perform with such panache... I don't see how they do it. It takes tremendous nerve, tremendous balls.
"I admire those guys. I admire Elvis Costello for his amazing output. Goddamn, the guy is so fucking prolific. For me a good year is like writing three songs. Songs don't come easy to me."
To the musician's bafflement, he's led by the photographer to a well lit mirrored bathroom for more photos. He poses uncomfortably in front of a mirror. Does he know what a mirror is? It looks like maybe he doesn't. He doesn't look too secure.
"We celebrities are used to this shit," he mock-boasts when he catches the writer's eye. "The typical bathroom shot."

More than any other psychedelic era band, The Grateful Dead epitomised the hippie in rock'n'roll.
– The Rolling Stone Record Guide

In their first beginning they were nothing spectacular, just another rock'n'roll band made up of suburban ex-folkies who, in '64 and '65, with Kennedy dead, the civil rights movement split into black and white, Vietnam taking over from Ban The Bomb, with The Beatles, Stones and Dylan, were finding out that the sit and pluck number had outrun its course.
– Rolling Stone, August 1969.
The Grateful Dead acid mythology has always been, for us, a joke.
– Jerry Garcia, March 1981

I've been into music so long that I'm dripping with it: it's all I ever expect to do.
– Jerry Garcia, August 1969
I'm surprised at our success. I can easily relate to the days when we outnumbered the
audience. In my mind that isn't long ago. And it wasn't that different. I'd enjoy it whether we
were obscure or hugely successful. Shit, I would pay to play music.
– Jerry Garcia, March 1981

Garcia is cheery; mordant and ironic at times. His intelligence is quick and precise. He and the Grateful Dead seem to wash along in the mysterious tide of change without changing too much. It all changes and nothing much seems to change.
In 1979 a Rolling Stone reporter noted that Garcia looked you right in the eye and smiled encouragement. In 1981 Garcia looks you right in the eye and smiles encouragement. He noted that Garcia, however complex, was entirely open and unenigmatic. I could say the same today. In 1979 though, Rolling Stone was convinced Jerry Garcia had clear and inspired ideas. In 1981 I'm convinced that Garcia is a man in love with his instrument who's pretty lucky how his mind's turned out. Despite the resonance in Garcia's conversation, the Grateful Dead seem to stand for the essential dowdiness of life.
Would you want to grow up like the Grateful Dead? As a force of change the Dead seem...dead. As a 'love draw' they're so alive if I think about it too much it aches.
Come on, Jerry, youth, rebellion, I don't want to be like the past, like you...pop is quick, a confrontation, flash...you're being consumed by millions of Americans and you're tastelessss!
Garcia chuckles, shoves a leg underneath his body and looks me in the eye with genial firmness. "First of all I don't think of myself as an adult. An adult is someone who's made up their mind. When I go through airports the people who have their thing together, who are clean, well-groomed, who have tailored clothes, who have their whole material thing together, these people are adults. They've made their decision to follow those routines. Brush their teeth regularly and all that.
"If you get to that stage all you get is rock solid boredom. With no surprises, when you're pretty sure that your best years are behind you. I run into people who are 24, 25, who are into that bag and I feel tremendously intimidated by them. I feel they're adults."
American youth seems to be adult at 15.
"It's just a phase. It'll pass. The next group of people will dislike that so intensely and so thoroughly that they'll fight through."
That will include the resentment and antipathy towards the Grateful Dead that I think should exist now.
"If it does, it does."
So if you're not an adult, what are you?
"I would say that I was part of a prolonged adolescence. I think our whole scene is that."
Moving towards what?
"Middling adolescence!" He laughs. I switch the tape off.
"Yeah, that's far enough!"

The writer puts his tape recorder away. The photographer gets his equipment ready.
The musician shakes his head as he recalls bits of the interview. "Fifteen-minute sets!" he marvels. "If I had to pay £8 for a 15-minute set I'd trip out... The economics of it, I would feel so guilty. Even if I did a 45-minute show so packed with emotion and intensity and everything it needed to have I would still feel like, God it ain't fucking worth it. I don't want to burn anybody. People have to work to get their little money... The best experiences I've had as an audience member is when I've seen a performer get excited and inspired and go over their time. Forget about time...forget about time and then you can think hey! An hour and a half has gone by and it seems like ten minutes! That's the stuff!"
The photographer scans the room looking for likely places the musician can pose. The musician stands looking a little lost near the window. The writer says to him that 45 minutes of his music seems to go on for two years.
"Well, have a nice rest!"
The whisky musician and sugar writer laugh, loudly. They'll never see each other again. 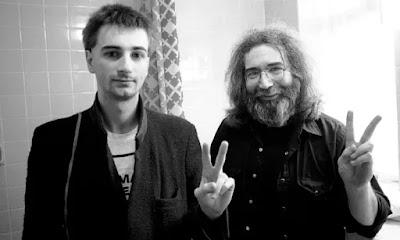 Email ThisBlogThis!Share to TwitterShare to FacebookShare to Pinterest
Labels: 1981